Phillips, Slotted, and Torx— oh my!  The tale of the screw heads. 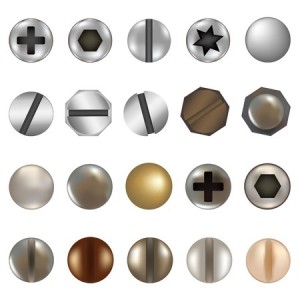 If you’ve ever gone to the tool box, grabbed a screwdriver, and realized you picked the wrong one, you’ve probably wondered why there are so many different kinds of screw head types in the first place? Wouldn’t it just be easier to standardize all screw heads so they’re the same? After all, it’s been immensely helpful in the electronics industry. Remember when all those cell phones had different chargers?

However, the fact remains that screws haven’t been standardized. Is there a good reason why

How many different kinds of screw head types are there?

The average Joe only ever wrestles with the Philips and slotted heat screw drives. Maybe there has been an occasion or two where you’ve used the square socket, or Robertson, screw drive which requires a hex key or an Allen wrench. If your building and construction experience is more extensive, you know that there’s a lot more to screws than just these three types.
In reality, there are dozens of different types of screw heads. The earliest screw heads were slotted, requiring a slotted head screwdriver. Better heads were then developed. For example, the Robertson was picked up by the Ford Motor Company in the early 1900s. Because the driver was easier to center and it stayed put, it was a much better option than the slotted screw for mass production methods.

What are slotted head and Phillips screw drives used for?

In the pursuit of creating the best screw heads for a wide variety of industries and purposes, dozens of additional screw heads have been created. However, slotted head and Phillips tend to be the most universally used in the United States.

Slotted head screws are cheap and easy to make, and they’re a good choice for applications that require the screws to be turned by hand. Cabinetry and furniture making are two areas where slotted head screw drives can be commonly found.

Although slotted head and Phillips head screw drives are common and effective, they both suffer from slipping and stripping. That’s where many of the other heads come in.
For example, the Robertson screw drive is much more resistant to slipping, which is a serious issue with slotted head screws. They are also much less likely to strip, which is a problem for Phillips screw drives.

There are so many screw head types that we could spend all day talking about them. Some, like the slotted tamper proof screw only go one way, while others, like the hex, were created to be effective in tight spaces.