As we’ve mentioned in other articles, plastics permeate every facet of our lives. They’re in our cars, on our kitchen counters, and in our bathrooms. Nowhere have they been adopted so fast as Aerospace, however.

Starting with World War II, plastics have played a role in aviation, replacing critical rubber components in planes after the Japanese took over major suppliers in the Philippines. Later, higher grade plastics began replacing important electrical insulators in planes then began to see use in mechanical applications, replacing gears, pulleys and fasteners. The benefit to using plastic components over aluminum is weight. For every pound of weight shaved off a plane, approximately $1,000 of fuel is saved over the plane’s lifetime. A lighter plane is simply more fuel efficient. 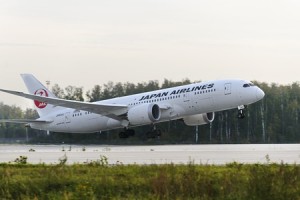 Today, plastic composites make up the majority of airplanes with the Boeing 787 Dreamliner being the first plane with carbon-fiber plastic composites making up the wings and fuselage, which means it is the lightest plane of its size and most fuel efficient. The U.S. Air Force has also implemented plastic composites to make stealth aircraft, using the plastics to absorb radar waves instead of reflecting them, reducing their radar signature. 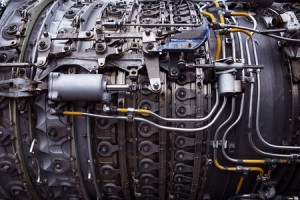 Significant parts of jet engines are made up plastic parts, including plastic fasteners

Aside from the adoption of composites to replace the body and fuselage of modern aircraft, plastics have also replaced most metal components in aviation. These include the air-return grills, the instrument panels, bearings and bushings, fasteners, the gears and gear spaces, and wire wrap insulation as well as much more. Essentially anything small and metal has been replaced with plastics and as industrial plastics become more robust, larger parts are being replaced with plastics or plastic composites.

Then came the birth of the space program in the 1960’s and American’s were presented with the seemingly impossible task of putting men on the moon; a feat that would require countless technological innovations and industrial ingenuity.

Spaceflight’s first problem would be weight. Not only did the spacecraft itself need to break Earth’s gravity, but also carry the immense amount of fuel required to do so, the spacecraft’s crew, and all the fixings in order to keep them alive in space. NASA also needed a material that would protect the crew from the extreme temperatures of space and re-entry. Kevlar and nylon became the plastics of choice. Used to protect the crew aboard the craft from the extreme temperatures of space and re-entry, layers of nylon and other insulators where wrapped under the body of the space crafts. Kevlar and nylon are still used today on modern craft and keep the long-lasting Hubble telescope among many other satellites in working order. 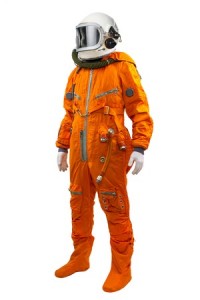 Kevlar and Nylon make up many parts of a space suit

Kevlar is used in space suits to maintain a strong, yet malleable layer of protection from the extremes of space, including whatever small debris an astronaut may encounter. Inside the suit plastic piping disperses cooling liquid around the astronaut’s body and composite plastics are used to make the helmet and visor for the space suit. The inner workings for the suits respiratory system are also largely plastic and the designs for which were adopted by fire fighters to make the revolutionary light respirators still in use today, with only a few modifications.

High-grade plastics have many inherent qualities that make them suitable for space exploration, such as their high resistance to thermal change, inherent fire resistance, high tensile strength and some even have radiation resistant qualities.

While plastics have not been as extensively used in space travel as they have been in airplanes, they are being strongly considered for the future as high grade plastics like Polyetheretherkytone (PEEK) demonstrate their ability to function in the hostile environments of space travel. The industry has been slow to adopt plastic composites over traditional materials because of the high risk nature of space flight and especially re-entry. While plastics have proven more than adequate for in-atmosphere flight, aerospace engineers are cautious in replacing everything with plastic. Currently, however, space programs both public and private are looking to plastics for light weight radiation shielding for long term space travel, like on the International Space Station or for interplanetary flight to places like Mars.  Peek fasteners particularly are widely specified.  Read more about PEEK Fasteners here.

For aerospace, the future of plastics is bright. As better plastics are engineered and their ability to be cost effective and lightweight are demonstrated without sacrificing strength and durability, more and more of the planes we fly and space-bound vehicles we build will be made of plastic.