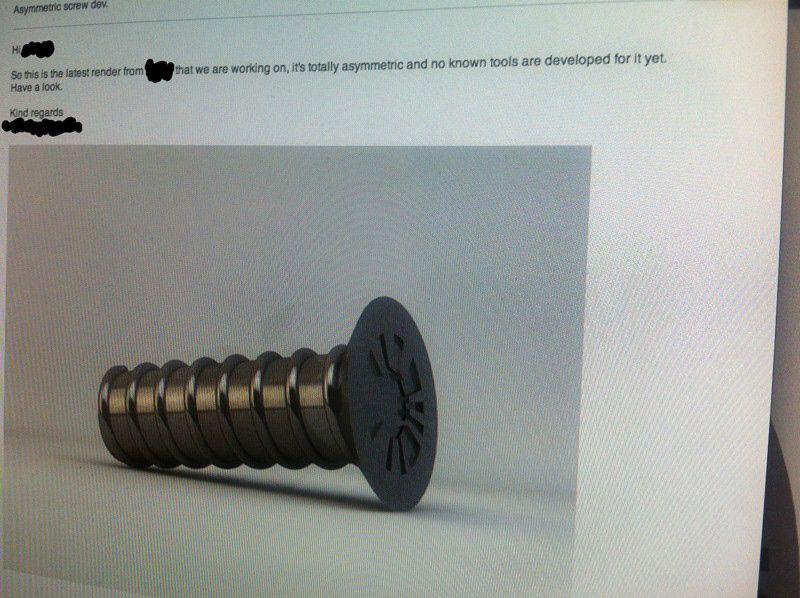 Custom screws by Apple are designed to keep tinkering Do-It-Yourselfers out of their iPhones.  Unlike more customizable products, what Apple offers consumers are meant to remain as Apple has conceived them.  Even minor repairs are intended to be kept under Apple’s auspices.

The above photo was found by Wired Magazine from the social media site, Reddit. It allegedly shows a new custom screw designed by Apple that cannot be removed with any current tool on the market.  The image turned out to be a hoax, but it points to a bigger truth.  Manufacturers like Apple are increasingly creating custom screws for the express purpose of keeping the average consumer out.

Back when the iPhone 4 came out in 2010, some folks immediately noticed that it was fastened together by an odd-looking screw. Called a Pentalobe screw, this custom screw cannot be unfastened by any ordinary screwdriver around.  To make even simple repairs, consumers had to ship the phone to Apple to fix.  That is, until IFIXIT started selling a $10 custom screwdriver to open up the possibilities to repair.

So what’s the moral of the story?  There is an ever increasing need for custom screws to be introduced on the market. And manufacturers are finding themselves looking for reliable sources for custom screws, since their design and use is becoming more and more expansive.

So if you find your iPhone “screwed” by Apple, get yourself a custom screwdriver and rejoice at the fact that custom screws are on the rise!