Are you considering Acetal Plastic Fasteners? 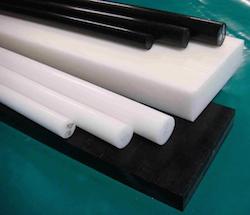 Acetal is the name generally used in the plastics industry to refer to acetal copolymer. E & T Components sells Acetal plastic fasteners, often under the Delrin tradename from DuPont.

Due to the lack of knowledge on thermal stability, acetal polymeric materials were not commercialized. Its creator, Hermann Staudinger studied the characterizations and properties of polymers and invented this structure in the 1920s.

Many other chemists began to synthesize POM, but could not grasp the concept of thermal stability. Not until Dal Nagore discovered that combining a heat resistant polymer, with acetic anhydride will convert the homopolymer, POM, to a thermally stable depolymerizable hemiacetal, processable plastic. Shortly thereafter, Nagore partnered with DuPont and replicated these parts for sale to automotive and engineering industries.  Dupont created and marketed acetal as Delrin.

This material is known for its hardness, strength, and rigidity. The color is opaque white due to its crystalline component, but it’s available in a variety of colors. POM homopolymer has a high melting point. With a low friction, it is often susceptible to polymer degradation, which happens through contact with acidic components. Thus, this explains why it’s composed of a homopolymer and a copolymer – it resists depolymerization with this duo composition.

The copolymer is usually ethylene glycol (C2) or butanediol (C4) units, which creates cyclic ether. The O-link will no longer be an acetal component, but an ether component, which can be stable for hydrolysis. Thus, reducing chain cleavage, which could leave room for oxidative properties to breakdown the material. POM is susceptible to oxidation and is often coated with an antioxidant to prevent it from occurring.

Since acetal is sensitive to oxidation and acid hydrolysis, it is also susceptible to raw acidic material and hot water. Low levels of chlorine in water supplies can cause corrosion cracking under stress. This problem is seen in the commercial and domestic American and European water supply companies’ systems. Normal moldings can endure hot temperatures, but defective ones can shed and often crack. POM copolymers and homopolymers are stabilized to endure this type of degradation. When plumbing components cracked and began to cause flooding in homes, this was the result of defective moldings in hot water supply resins. Acetal fittings fail first before the pipework, so this material isn’t used in plumbing or air components in households or industrial buildings to avoid harm to its tenants and the environment.

Acetal is an industrialized commodity used in mechanical and electric engineering, and medical applications. It is even used in automotive components, common household items, and sports.

In biological applications, this polymer is often used in most glasswork since it can endure failure. An example would be using polymer clips on heated areas of glassware, such as distillation with a flask to column, or column to head joint. Since polymers are susceptible to acid hydrolysis and chlorine, it will have a poor performance when exposed to susceptive gases, especially hydrogen chloride. Exposure happens when the sealants wear down without warning, creating a health hazard as the glass may break or shatter. In this instance, a high quality stainless steel is the best choice to use.

When choosing components and fasteners for manufacturing and production, consider the application, the environment of the finished products and the characteristics of the materials available. Plastics, and especially some of the advanced composite materials, make a great choice for many applications and offer exceptional strength and resistance to wear.